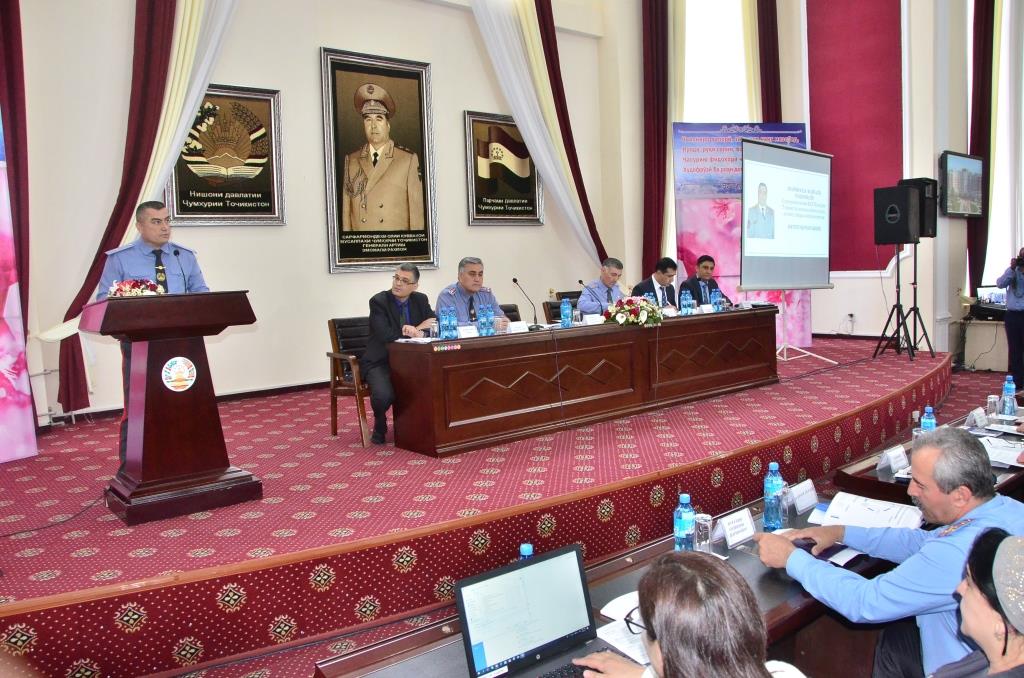 A civilized society requires law enforcement officials, especially the police, to carry out their duties in good faith, maintain public order, the rule of law, respect for human rights and freedoms, and fight against all types of crimes. In this regard, in accordance with the instructions and instructions of the Founder of Peace and National Unity, the Leader of the Nation, President of the Republic of Tajikistan, respected Emomali Rahmon, at a meeting with militia officers dedicated to the Professional Militia Day for the implementation of the Militia Reform Strategy for 2013-2020, the decisions of the Collegium under the Minister of Internal Affairs for cooperation with civil society, on May 24, 2019, at the Academy of the Ministry of Internal Affairs of the Republic of Tajikistan with wide participation of management, operational officers, district inspectors, teachers students and cadets of the Academy of the Ministry of Internal Affairs in cooperation with the international organization “Sawerworld” (Dunyoi Bekhatar) held a republican scientific-practical conference on the theme “Militia interaction with the public”.
The conference was opened by the Head of the Academy of the MIA of the Republic of Tajikistan, P.h.D. in Law, Associate Professor, Militia Major General Sharifzoda Fayzali Rahmonali and stressed that over the past few years, on the instructions of the Interior Minister, Militia Colonel-General Rakhimzoda Ramazon Hamro, a lot of work has been done within the framework of the implementation of the Militia Reform Strategy, and the police cooperation with the public has been strengthened.
Public organizations have done a great job of implementing the strategy in the cities and regions of the republic. Under the departments of the MIA of the Republic, the Centers for Cooperation with Civil Society and Protection of Public Order were opened; most of the youth were involved in cooperation with the police. In this regard, today's conference again discusses these issues to strengthen police cooperation with the public, where specific recommendations will be presented.
Then the moderator, deputy head of the Academy of the MIA for science, P.h.D. in Law, associate professor, militia colonel Saidzoda Z.A.
The conference heard a large number of reports, in particular, the report of the National Coordinator on Militia Reform, Major General of Militia Shodmonzoda Farhodbek Aliyor on the simplified mechanism of public access to the militia, the report of Khalimov Nurali, adviser to the “Sawerworld” (Dunyoi Bekhatar) organization, on the interaction of the police with the public, report of the head of the Militia College of the MIA, P.h.D., militia lieutenant colonel Umari Hayom Amirsho about the situation and prospects for the interaction of internal affairs bodies in society, senior lecturer of the Academy of the Ministry of Internal Affairs, police major Nuriddinzoda Sufi Nuriddini about the problems of introducing the norms of the Administrative Offenses Code within the framework of the militia reform and others.
After hearing the reports between the conference participants, scientists, specialists and representatives of the “Sawerworld” (Dunyoi Bekhatar) organization, and members of the Public Council of the MIA held a free conversation, they presented proposals to prevent young people from joining extremist groups, and to carry out this explanatory work with the population religion and Islam in cities and villages of the republic.